(CNN)Presidential candidate Donald Trump is heard on tape discussing with his attorney Michael Cohen how they would buy the rights to a Playboy model’s story about an alleged affair Trump had with her years earlier, according to the audio recording of the conversation aired exclusively on CNN’s “Cuomo Prime Time.” 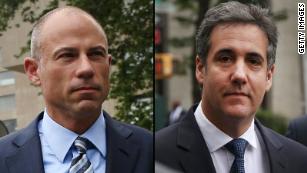 Stormy Daniels’ lawyer wanted to discuss settlement with Michael Cohen
The recording offers the public a glimpse at the confidential discussions between Trump and Cohen, and it confirms the man who now occupies the Oval Office had contemporaneous knowledge of a proposal to buy the rights to the story of Karen McDougal, a woman who has alleged she had an extramarital affair with Trump about a decade ago.
Cohen told Trump about his plans to set up a company and finance the purchase of the rights from American Media, which publishes the National Enquirer. The recording captures what appears to be a routine business conversation of several matters on their agenda. The audio is muddled and the meaning of Trump’s use of the word “cash” is disputed by the two sides.
“I need to open up a company for the transfer of all of that info regarding our friend David,” Cohen said in the recording, likely a reference to American Media head David Pecker.
When financing comes up again later in the conversation, Trump interrupts Cohen asking, “What financing?” according to the recording. When Cohen tells Trump, “We’ll have to pay,” Trump is heard saying “pay with cash” but the audio is muddled and it’s unclear whether he suggests paying with cash or not paying. Cohen says, “no, no” but it is not clear what is said next.
No payment was ever made from Trump, Rudy Giuliani, the President’s attorney, has said. Giuliani has previously acknowledged that the recorded discussion related to the buying the story rights. 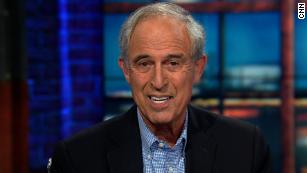 Cohen lawyer: Only mobsters use cash 02:15
“There’s no indication of any crime being committed on this tape,” Giuliani said on Fox News Channel Tuesday night.
The recording, which was provided to CNN by Cohen’s attorney Lanny Davis, was made in September 2016. It’s the latest breakdown in the decade-long relationship between Trump and Cohen, who once said he would take a bullet for the President. Cohen in recent weeks has made clear he is open to cooperating with US prosecutors.
“What is this about? This is about honesty versus false disparagement of Michael Cohen. Why is Giuliani out falsely disparaging Michael Cohen — because they fear him,” Davis said on “Cuomo Prime Time.”
“What do they fear, Chris? Why am I representing him? They fear that he has the truth about Donald Trump. He will someday speak the truth about Donald Trump. The truth is that when Donald Trump said ‘cash,’ which Rudy Giuliani knows that only drug dealers and mobsters talk about cash, it was, you heard Michael Cohen … say what? ‘No, no, no, no.'”
Davis later added: “Ladies and gentlemen, if you voted for Donald Trump, listen to the tape and ask yourself: Is Donald Trump lying when he said he didn’t use the word ‘cash’ and accuses Michael Cohen of using the word ‘cash’? Cohen has been disparaged. Cohen has been insulted and called all sorts of things by people around Donald Trump.”
Giuliani and Alan Futerfas, a lawyer for the Trump Organization, refuted that the tape shows Trump was offering a cash payment.
“There’s no way the President is going to be setting up a corporation and then using cash, unless you’re a complete idiot,” Giuliani said on Fox News Tuesday night.
“This was leaked on us with a very, very scurrilous description of what was on the tape,” he added.
Cash, in the conversation, was in reference to how a deal would be financed, Futerfas said.
“Whoever is telling Davis that cash in that conversation refers to green currency is lying to him,” Futerfas told CNN. “There’s no transaction done in green currency. It doesn’t happen. The whole deal never happened. If it was going to happen, it would be a payment to a large company that would obviously be accompanied by an agreement of sale. Those documents would be prepared by lawyers on both sides.”
“The word cash came up in the context of the distinction between financing, which is referenced, and no financing, which means a full payment, a total one-time payment. That’s the context in which the word cash is used,” he said. “Anyone who knows anything about the company or how the President does business knows there is no green cash. Everything is documented. Every penny is documented.” 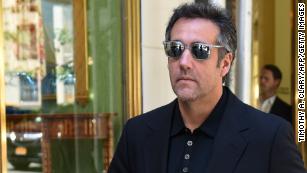 U.S. attorney has 12 audio recordings of Trump’s ‘fixer’ Cohen 02:47
On the tape Cohen also says, “I’ve spoken with (Trump Organization chief financial officer) Allen Weisselberg about how to set the whole thing up with funding.”
Futerfas declined to answer whether the payment would have been from the company or from Trump’s personal finances. He said Weisselberg wore two hats working for Trump and his company. “I don’t even know what Michael Cohen would have said to Allen Weisselberg because all Allen does is bookkeeping and process requests for transactions that are given to him,” Futerfas said.
Court filings said federal prosecutors have obtained 12 audio recordings from the FBI raids on Cohen earlier this year. CNN previously reported that Trump’s lawyers waived attorney-client privilege on the President’s behalf regarding the recording involving him personally.
The audio recording of Trump and Cohen relates to whether Trump should buy the rights of the story from American Media, which paid McDougal $150,000 in August 2016 for her story about an alleged 10 month affair with Trump. The story was never published by AMI.
An attorney for AMI declined to comment Tuesday night.
A spokesman for the US attorney’s office in Manhattan, which is investigating Cohen, declined to comment.
In addition to discussing the McDougal payment, Trump and Cohen are overheard running through a list of potential legal issues, including contesting a New York Times request to unseal divorce records from Trump’s first wife Ivana as well as more mundane matters such as polling numbers and Trump surrogate Pastor Mark Burns.

Trump refuses to budge on border wall, even in light of economic slow-down and voter disapproval

Whodunnit: Speculation on the author of The Daily Called op-ed